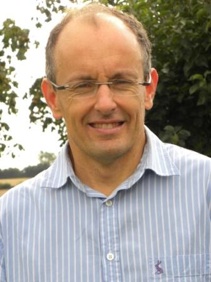 In 1996, a 27-year-old London-based surveyor called Tom Isaacs was diagnosed with Parkinson's disease. Like others before him, he struggled to come to terms with his new identity. As he put it, “The truth was that I was now trapped inside a body that was now ageing at an alarming rate and was often incapable of responding to the demands put on it.”

Then one night Isaacs had a dream that would change his life. It was a dream about a group of highway workers digging holes in the road with pneumatic drills. “In the dream,” Isaacs recalls, “there was a power cut and the workers laid down their tools and went off to get a cup of tea. I walked into the cordoned off area, picked up a drill, and with my tremor I was able to make the drill make a big hole.” Isaacs says he woke up with a smile on his face thinking that maybe he could make something positive out of his Parkinson’s.

Isaacs came up with a plan to raise money for Parkinson’s disease – a sponsored walk. But not just any walk. He proposed the mother of all sponsored walks – to hoof it around the entire coastline of Great Britain, a distance of 4,500 miles.

He sought support from Sir David Jones, the chief executive of the retail empire NEXT PLC, who also had Parkinson’s. When Jones heard Isaacs’ plan, he reportedly said, “you're a complete nutter,” but then wrote him a check for £20,000. Tom was on his way.

On April 11, 2002, Isaacs set off on his expedition. Over the next 365 days, moving in an anticlockwise direction round Great Britain, he averaged 16 miles a day, wore out five pairs of boots, lodged at 238 different bed and breakfasts, and raised £350,000 for PD research. Along the way, a total of 1032 people joined him for parts of the journey. On April 11, 2003, after a grueling trip (chronicled in his fascinating memoir Shake Well Before Use: A Walk Around Britain’s Coastline), he arrived back in London, where he was met by fellow parkie, Sir Richard Nichols, former Lord Mayor of London. As if this wasn’t enough, two days later Isaacs ran the London Marathon.

Soon afterwards, Isaacs, Jones, and Nichols – together with Nichols’ close friend Air Vice Marshall Michael Dicken (who also had Parkinson’s) – met up for dinner. The four parkies agreed that there was a need for a more focused and urgent drive towards improving Parkinson’s therapies. Despite doing good work at the time, the Parkinson’s Disease Society (now Parkinson’s UK) had no history of supporting research into a cure. Back then, Tom recalls, “the word cure was never used… you know it was forbidden. Cure was seen as a false hope. And actually if you don't have hope in Parkinson's disease, you don't have anything.”

As Tom says, the consensus was “that we needed something focused on the research not just on the care... and it needed to be a bit more edgy, a bit more feisty.” Since no such organization existed, they decided to create one. In 2005, Isaacs, Jones, Nichols, and Dicken, (together with Tom’s friend Helen Matthews, who had worked with Tom on his walk) founded The Cure Parkinson’s Trust (CPT).

There was one scientist in particular that Isaacs wanted to fund. During his coastal walk – shortly after crossing the Severn Bridge that connects Wales and England – he had met with Bristol neurosurgeon, Steve Gill. In a pilot study of five patients, Gill had infused GDNF – a neurotrophic factor (a kind of brain fertilizer) capable in principle of reviving damaged neurons – and had reported positive results. Gill made quite an impression on Isaacs. “When I spoke to him,” Isaacs told me, “I really could see it in his eyes that he genuinely believed that he could cure this condition… and it was hugely exciting... And I just realized that's where I wanted the money to go to.”

It must be said that the field of neurotrophic factors is controversial. Apparent successes in small “open label” studies like Gill’s did not hold up in a large double blind controlled trial. Gill is a provocative figure, a brilliant problem solver who has come up with some novel ways to deliver growth factors across the blood brain barrier to the desired brain regions. But some other scientists are as yet skeptical that he has succeeded where everyone else has failed.

This raises a key question. How does a new charity decide which projects to fund? How can former surveyor, a chief executive of a retail chain, an ex-Lord Mayor and a Vice Marshall in the RAF decide which research projects are legitimate and which are half-baked? Isaacs freely admits, “When we started out we didn't know what we were doing and we funded people who talked a good game… we did it on gut feeling really.” But longer term, they realized they needed a scientific heavyweight on the team. And perhaps fittingly for this British story, they found him in a cricket match.

In 2006, CPT organized a fund-raising game against the Royal Household Cricket Club. Fortuitously, one of the players on the Royal Household team turned out to be a distinguished pediatric cardiologist, a Council Member of the Royal Society of Medicine, and an expert in evidence-based medicine. His name was Richard Wyse.

Isaacs realized Wyse was a perfect fit. The fact that he wasn’t a neuroscientist was a big plus. Says Isaacs, “He was brilliant enough to take an overview of the field and open enough to look at new ideas.” And he had a feisty, irreverent manner that matched the new organization. “He’s like a terrier, he just won’t let go, he badgers people into submission, which is exactly what we needed… so we let him loose to see what damage he could do, and he did some real damage. He dared to challenge a few scientists, but gradually people realized he knew what he was talking about and he soon became a bit of an expert on everything.” With Richard Wyse on board, The Cure Parkinson’s Trust began a new chapter.

In 2010, patients, care takers, researchers and clinicians converged on Glasgow for the Second World Parkinson Congress. At the meeting, Richard Wyse and Tom Isaacs forged two important scientific collaborations. The first was with Swedish neuroscientist Patrik Brundin (of the Van Andel Institute in Grand Rapids, Michigan) to develop a program to investigate existing drugs with a view to “repurposing” them for PD. Once candidate drugs had been identified, small “learning trials” were to be run in parallel as so-called Linked Clinical Trials (LCT). This program is now underway. Tom’s name appears on the first report by the LCT committee, which is published in the Journal of Parkinson's Disease. Tom is also a co-author on a paper testing the diabetes drug exenatide for PD, which is published in the Journal of Clinical Investigation. He’s excited about where this might lead. “It may not work, but if it does it'll probably be the first thing to bring about a disease modifying therapy for Parkinson's disease.”

The second collaboration involved Walter Maetzler and colleagues from the University of Tuebingen. The partnership emerged from discussions about finding better ways to monitor the progression of PD. Currently, neurologists use a subjective metric – the United Parkinson’s Disease Rating Scale (UPDRS) – to provide a snap shot of a patient’s condition every three to six months. In the SENSE PARK project, the Tuebingen scientists are seeking to mount sensors on patients’ bodies that will record 24/7 information; a metric, they hope, that will much better captures how the disease progresses in different patients. The first devices should be available for 2014.

I met Tom at the Third World Parkinson Congress in Montreal in October 2013. Now a major player in the PD world, I watched him moderate several panels with scientists. He’s an engaging character who copes with a pronounced upper body dyskinesia. Interestingly, he has not sought out deep brain stimulation for himself, he says, because he is concerned that his voice (and as a consequence his advocacy) would be adversely affected.

Eighteen years into his disease, he’s clearly enjoying himself. In his words, “As you get more and more involved it gets more and more exciting and more and more demanding.” He still has that positive gritty determination that enabled him to overcome all the setbacks on his yearlong march around the British coastline. And he pushes others to be upbeat. “If we could just convince scientists to talk about all the good things rather than to start shouting each other down that would be great …we need that can-do attitude… because PD is getting more prevalent… This is a condition that's going to double by 2030.”

What’s most inspiring about Tom is his tenaciousness. I sense he’ll never give up hope. When I asked him about the spate of recent failures in neurotrophic factor research, he admitted there was a lot at stake in the two remaining clinical trials. [One of these is Steve Gill’s latest study – which CPT is co-funding alongside Parkinson’s UK – the other is an NIH trial.] “It’s critical that Steve Gill’s or the National Institutes of Health’s trial works, otherwise the neurotrophic factor approach is dead.” He sighed adding, “if it doesn't work, it doesn't work!” Then he smiled at me and continued, “but there are many other things out there that are exciting. Remember, if you don't have hope in Parkinson's disease, you don't have anything.”

After my Parkinson's Disease diagnosis, my primary care provider introduced me to Kycuyu Health Clinic and their Parkinson's disease Formula protocol, the herbal treatment has made a tremendous difference for me. My symptoms including numbness and muscle weakness all disappeared after the treatment plan! Their website is w w w. kycuyuhealthclinic. c o m