Abstract. Subthalamic nucleus deep brain stimulation (STN DBS) is an established therapy for a subset of patients with Parkinson’s disease, and the adjustment of DBS parameters is typically guided by the patients’ rigidity and tremor. Although these cardinal symptoms remain relatively stable over time, progressive worsening of axial symptoms compromise motor function and quality of life. Because many patients report improvements in their global mobility after gait improvement, we have been adjusting DBS parameters during the long-term after surgery based on gait analysis. Here, we describe a practical strategy for troubleshooting gait problems in PD DBS patients by revising stimulation parameters through “hands-on” programming, which can be a useful alternative approach for improving patients’ outcomes after STN DBS.

Subthalamic nucleus deep brain stimulation (STN DBS) is a recognized therapy that improves motor ﬂuctuations, dyskinesia, and quality of life in appropriately selected patients with Parkinson’s disease (PD). The success of DBS therapy does not rely solely on the surgery itself but depends upon the entire process, encompassing pre-operative patient selection, patient-speciﬁc surgical treatment to minimize risk and maximize beneﬁt, and post-operative management, including optimal DBS programming. The adjustment of stimulation parameters in DBS is typically guided by the assessment of patients’ rigidity (mainly in the upper limbs) followed by tremor evaluation, which has more variable responses [1]. Although these clinical parameters remain relatively stable over time [2], progressive worsening of axial symptoms including gait and balance commonly diminish motor function and quality of life. Thus, rigidity and tremor are less helpful to guide long-term DBS adjustments [2].

Although gait and balance impairments are similarly inﬂuenced by levodopa and STN DBS, post-surgical outcomes are strongly inﬂuenced by variables such as lead location, stimulation parameters, medical management, and disease progression. Basically, four main scenarios of gait/balance disorder can be observed after STN DBS: 1) impairment of ambulation secondary to a lesion-associated effect of the electrode implantation, which can be transient or permanent; 2) stimulation induced adverse effects due to spreading of current into surrounding structures such as the internal capsule; 3) levodopa-responsive gait impairments, for which increases in medication and stimulation energy are expected to help, but troublesome dyskinesia might be therapy limiting; and 4) gait problems resistant to dopaminergic medication and classical neurostimulation strategies. The latter are commonly due to PD progression, but can sometimes be ameliorated with advanced DBS programming strategies discussed below.

Many patients report improvements in their overall parkinsonism after gait is ameliorated as gait function is an excellent mirror of a patient’s global mobility. In view of that ﬁnding, we have been adjusting DBS in our outpatient clinic based on gait analysis, espe-cially during long-term follow-up. Here, we describe a practical strategy for troubleshooting gait problems in PD DBS patients by revising stimulation parameters through “hands-on” programming, which can be useful for improving patient outcomes in clinical practice..

Pragmatically, the ﬁrst step is to watch the patients rise from a chair and walk through a straight corridor at a comfortable pace (Fig. 1). The walking speed, step symmetry, signs of dyskinesia or dystonia, and signs of freezing of gait (FoG) should be evaluated.

Sometimes the spread of current into the internal capsule is not obvious and can lead to gait impairment and falls after long-term STN DBS [1]. We recommend turning off the stimulation and re-evaluating the patient’s gait. If ambulation improves with stimulation off, each electrode should be turned on separately to identify the “guilty” one, then the stimulation parameters on that side (Video, segment 1) should be reduced to diminish the stimulation induced adverse effect. If deactivation of DBS does not improve ambulation, especially in cases where gait and balance impairment occurs immediately after DBS implantation, a lesional effect of the surgical procedure is likely responsible. Such lesional effects commonly improve with time but may recover incompletely and produce permanent adverse effects on ambulation.

Based on history, it should be determined whether the gait disturbance occurs in on- or off-medication state. As a rule, when axial symptoms are responsive to dopaminergic medication, they are likely to improve with STN DBS. Off-medication gait problems (including off-freezers) can be managed with bilateral increments in stimulation energy (Video, segment 2). In cases where gait worsens in the on-medication state due to dyskinesia affecting the trunk or lower limbs, lowering dopaminergic equivalent daily dose (LEDD) and/or activating more dorsal contacts (to stimulate the lentiform fasciculus) may be useful strategies (Video, segment 3) [1]. 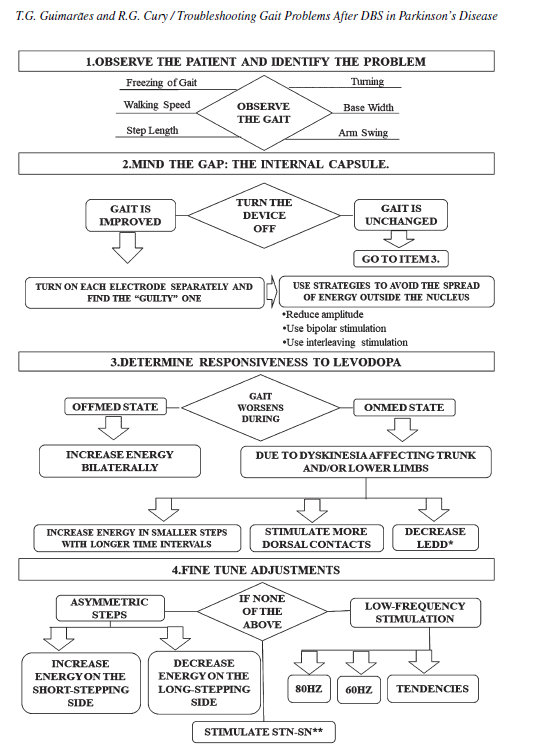 If gait abnormalities are refractory to levodopa and the conventional DBS programming strategies described above, the following less commonly used reﬁnements of DBS parameters may be beneﬁcial. Based on the hypothesis that poor interlimb coordination worsens FoG [3, 4], asymmetric steps may be addressed by either increasing the energy on the underperforming, short-stepping side, or decreasing it on the overperforming, long-stepping side (Video, segment 5). Low-frequency stimulation (LFS) ranging from 60 to 90 Hz can also be effective (Video, segment 4). However, gait improvements achieved through LFS may be transient, so additional vigilance is required in this situation [5]. Finally, stimulating the best contact to improve cardinal motor symptoms and adding a more ventral contact intended to spread current to the substantia nigra pars reticulata can ameliorate some gait-related issues, especially FoG [1, 6, 7].

The art of optimizing DBS parameters in PD can be challenging and time-consuming [6, 8]. Particularly in the long-term, cardinal symptoms such as rigidity and tremor may become less useful in guiding DBS programming, and gait analysis can play a more meaningful role in DBS optimization. Herein, we propose a stepwise approach that employs gait evaluation as a tool that can serve as a potentially useful adjunct to traditional STN DBS programming (see Flowchart). This conceptual model harkens back to Charcot’s teachings, which emphasize the utility of clinical observation as a powerful “weapon” in neurology. In keeping with this theme, while carefully performing the aforementioned steps, the clinician should be perceptive of patient-speciﬁc DBS tendencies that can be useful when ﬁne-tuning stimulation parameters. For example, if a patient responds positively to a pulse-width increase and not to amplitude elevation, then further adjustments should take this tendency into account. It is also important to train the patient and caregiver to use of the DBS patient controller, which can be useful in determining individual patient tendencies and in making optimal, patient-tailored DBS parameter adjustments.

Gait impairment is a very common mid- to long-term complaint in patients with Parkinson’s disease after STN DBS. A systematic approach that includes programming strategies based on gait analysis can maximize patients’ global motor beneﬁts and enhance quality of life.

The authors thank the patients for their kind cooperation during the study. This research did not receive any speciﬁc grant from funding agencies in the public, commercial, or not-for-proﬁt sectors.

TG and RG report no disclosure relevant to the manuscript.

Video legend: Segment 1 shows a patient with a severely bradykinetic gait when subthalamic nucleus deep brain stimulation (STN-DBS) is active. After turning the device off, amelioration is observed. Furthermore, when activating one lead at a time, it was determined that left-sided stimulation was solely responsible for the adverse effect. In segment 2, a woman in an on-medication (levodopa) and on-stimulation state has episodic freezing of gait (FOG), short steps and low speed. When DBS energy is increased, her gait improves. However, after further energy increments, troublesome dyskinesia ensues (segment 3). Segment 4 illustrates the potential beneﬁt of low-frequency stimulation for gait and sometimes even for posture (segment 4-patient 1). Segment 5 displays a patient with a slightly asymmetric gait and how asymmetrical stimulation may be beneﬁcial in such cases. This case also illustrates how adjustments intended to improve ambulation may diminish appendicular therapeutic beneﬁt. (A) Tremor becomes evident on the patient´s right hand following DBS programming adjustment.

Read the full article published in the Journal of Parkinson’s Disease here: 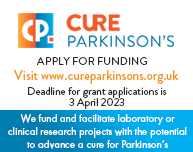 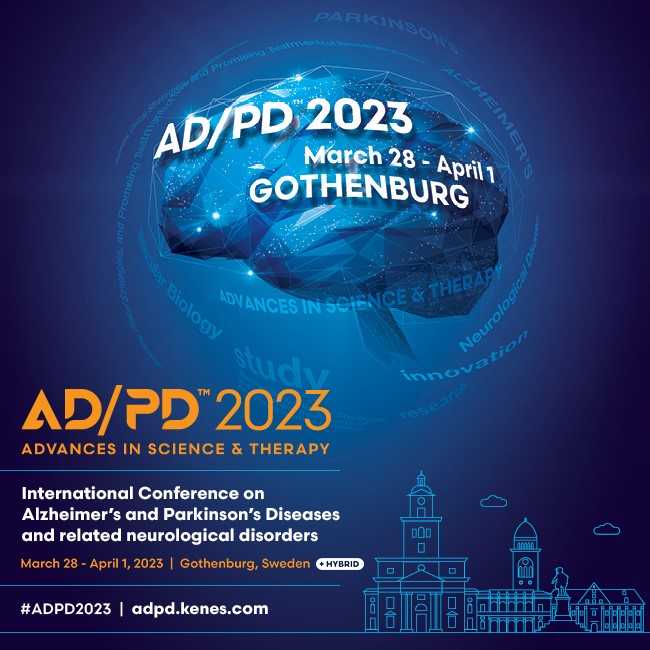 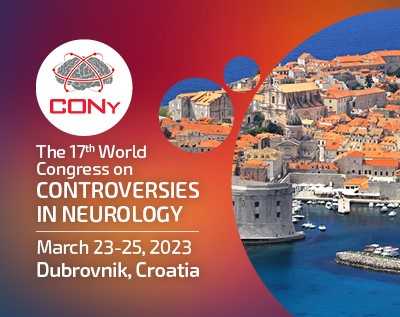