Something to Cry About: Grief, Depression, and Parkinson’s Disease

John is the Director of Student Advocacy at Queens College, City University of New York, and is a Patient Advocate In Research (PAIR) for the Parkinson’s Foundation. He lives in Brooklyn, NY, USA with his wife Kate and their son Ocean.

Introduction
This piece was inspired by a Facebook post from a fellow Person with Parkinson’s Disease (PwP), that began: “I know that I am not as impaired as others here, but…”

This was upsetting for me to read. I think that in the Parkinson’s community, we sometimes unconsciously shame people when they express their grief by saying things like: “It’s a life sentence, not a death sentence…” or “You have a very manageable form of Parkinson’s Disease…”

On many occasions I have said: “I am one of the lucky ones…”

Upon hearing of my diagnosis, a well-meaning friend once said to me: “At least it’s not cancer…”

If online support groups are any indication, this is one of the most common verbal blunders made by family and friends of PwP. Please keep in mind, you can have cancer and Parkinson’s Disease. They are not mutually exclusive.

Of course, these statements are meant to instill hope and make people feel better. While such comments may accomplish this, they may also be shaming people and discouraging them from expressing their feelings. In this United States, shaming seems to be built into our culture.

Another infamous American parenting technique is to point out other people who are suffering more. I do not know how you feel, but learning about the suffering of others never made me feel any better about myself. Hearing about children who were starving, for example, never made me feel better or encouraged me to eat brussels sprouts.

Recently, I thought: “What if a child has something to cry about and has not told anyone yet?”

Will these approaches help the child to gather up enough courage to talk about the issue? Somehow, I doubt it. These approaches also do not account for depression. This leads me to a very personal issue.

At the Risk of Over-Sharing…
I have attempted to write this section several times, but fear of over-sharing or being viewed as a complainer, especially, when so many others have it far worse, has kept me from doing so. Even typing this feels self-indulgent.

Starting at the age of 13, I began to feel depressed. In my family, doctors were for broken bones and stiches. I never discussed my depression with them because we were raised to “pull ourselves up by our bootstraps.” We were told things like: “You have a roof over your head, and you have never gone to bed hungry…”

This made me think: “Well, I have a home and food, I had better not complain...”

So, I attempted to hide how I felt. I thought that I was all alone and that no one else felt this way. According to the World Health Organization, 264 million people worldwide suffer from depression; suicide caused by depression is the second leading cause of death for people between 15 and 29. Of course, I did not know this at age 13.

I do not blame my parents, because this approach to child-rearing was the product of generations of brainwashing. In my extended family, people felt that this method of consoling people actually worked.

In any case, I honestly believed that I had hid my feelings well. In truth, as a result of this attempt to cover things up, I became an unlikeable person. In retrospect, this should have been no surprise to me because I did not like myself. There were other consequences to burying my feelings. For example, I began drinking at the age of 15.

At age 30, I found myself newly clean and sober, and in therapy for the first time. This made me feel as though I had lost some important battle. I had tried everything else, so I “gave in” – admitted defeat, and finally sought out a therapist.

At my fifth or sixth session, Flo, my therapist said: “Wait a minute! Do you think that we are going to discover some deep-seated problem or event from your childhood, and that the knowledge of this will make you better?”

This is exactly what I thought. After all, it worked that way in the movies. I soon learned that, for me anyway, therapy did not work that way. I was eventually diagnosed with cyclothymia, a mild form of bipolar disorder. In my manic states, I annoyed everyone around me (I still do) and when depressed, I hid in my room or office. I can describe my mania only by comparing it to the dinner scene from the film Say Anything (link) in which Lloyd, played by John Cusack, just cannot stop talking.

One day, my girlfriend at the time said to me: “I am going to class. Make sure that you are not still in your pajamas when I get home…” Then, I realized that I had spent entire days in my pajamas. I once again “gave in” and went back to therapy. For the first time, I started taking medication.

The issues above were misdiagnosed until I was 47. Then, I found out definitively that I had Parkinson’s disease. My doctor was great, and she held space for me to express my grief.

“This is a horrible thing and you did nothing to deserve it….no one deserves it…”

I cried. Then we discussed treatment options, and the fact that I would live a long life saddled with a horrible inconvenience.

A Little Bit Selfish
At first, I thought that I would keep it a secret by only telling my wife. My reasons for this were selfish. I simply had no energy for consoling others and felt that I needed to take care of myself. While I might encourage newly-diagnosed PwP to do this at first, in the long run it is not practical for many reasons.

It is not practical because people will see that something is wrong and be left to draw their own conclusions. Rumors were flying around at work. After I told my assistant, for example, she informed me that people asked her: “Is John drinking?”

I decided that it was time to tell my son when he was 6 years old. There was nothing magical about this age; he had not hit some developmental milestone or anything. It was because he asked my wife: “Mama, does Daddy have Park Slope Disease?”

You would have to know something about Park Slope Brooklyn and the stereotype of the people who live there to know why this is funny. Trust me, it is. My wife and I explained my condition to our son in terms of strengths and challenges, which is how we discuss many other issues that we have dealt with in our family. It was “no big deal.” We are very open in my family. On Wednesday nights after dinner, for example, I always get up and say, “I am going to therapy.”

Who Is Really Suffering?
About 2 years ago, I came to the conclusion that I had been selfish. You see, this suffering does not belong to me alone. It belongs to almost everyone whom I interact with on a regular basis. It belongs to wife, for example, who has to do more because I am doing less. What saddens me the most is that it also belongs to my 9-year-old son, Ocean. He wants a father who can play soccer with him instead of one who needs to rest every 15 to 20 minutes. My wife and son also have the right to their own grief about my condition and it had been selfish of me not to think about that.

A Conclusion, of Sorts
So, I finally have something to cry about. What I have learned, however, is that the grief, sadness and depression caused by my Parkinson’s disease are no more real than the grief caused by my depression. At age 47, I finally learned that I am entitled to my feelings. Three years later, I also realized that this grief also belongs to my family, friends and many others in my life.

“You are entitled to your feelings. We all have something to cry about. Please get a therapist, because everyone needs one. If you do not, you will just annoy the hell out of your family and friends!” 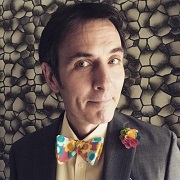