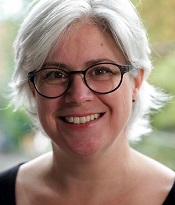 As a member of a multidisciplinary team, Dr. Heidi McBride contributes her expertise in the cell biology of mitochondrial dysfunction to the complex pathogenesis of motor neuron and other degenerative diseases. Her laboratory uses various complementary approaches to try to understand why hundreds of mitochondria inside each cell behave as an interconnected group, and what this interaction means to the cell, to tissues and to the body. Mitochondria work as combustion engines, using oxygen to burn fat and sugar. The consequent energy is used in our bodies as fuel. It was long thought that mitochondria performed their function without disturbing the general state of the cell, but recent data has changed this view. Today, mitochondria are seen as extremely dynamic structures that fuse together, branch and split apart. By expanding our understanding of this process at the molecular level, Dr. McBride hopes to contribute to more targeted therapeutic strategies. (Source: mcgill.ca)
_____

When you picture mitochondria and all that they do, how clear is the image you see?

The last 10 years has seen a revolution in our appreciation of mitochondria. For a long time people were blinded by its primary role as the ‘powerhouse of the cell’, and just thought it was there to make ATP. I did my post-doc in vesicle trafficking and all the cell biologists at the time never included mitochondria in that process, there was little concept of mitochondria in cell biology at all. Then, 17 years ago, we started to realize that mitochondria are dynamic, they don’t just sit around making ATP, they fuse and divide and do many other things. Now, we realize that mitochondria have to be informed of almost every decision that a cell makes. We have been trying to find the mechanisms for all those signals and their implications for cell function and disease. I still don’t think we know much about them, we are right at the beginning of what will be an explosion in our understanding of mitochondria.

What, if anything, does it feel like to be a mitochondria?

I think it would feel like a big machine, there are a thousand biochemical reactions making all kinds of proteins and metabolites, while constantly breaking down fat and sugar. Most of the other parts of the cell just move things around, but mitochondria are beasts, they are their own creature.

On your lab's website it says "mitochondria behave as an interconnected group", does that imply they have some sort of hive mind?

They absolutely have a hive mentality. This is a big part of trying to figure out why they fuse. When the cell is under stress, the mitochondria band together to protect themselves against being eaten by autophagy (the breaking down of cell parts) or to stop the cell from undergoing apoptosis (programmed cell death). They definitely have a collective behavior that responds to cell signals, but individual mitochondria also act on their own based on their status and environment. When you think about their evolutionary history, it makes sense as they used to be bacteria and still have remnants of the original bacteria mechanisms to swarm.

How big of a role do mitochondria play in oxidative stress?

There are other places where reactive oxygen species (ROS, i.e. reactive chemicals that induce oxidative stress) are produced, but mitochondria are the main creators of oxidative stress. All of the oxygen that you breathe goes to the mitochondria for respiration, it is a combustion engine, it takes oxygen and converts that into energy. Part of the chemistry of that is to transfer electrons, if that is a little bit inefficient, free radicals will leak out that can damage lipids and proteins.

But, ROS are also signaling molecules, meaning you should not take too many anti-oxidants because they interfere with the mitochondria’s ability to tell the nucleus what to do. If there is stress in the mitochondria, ROS tell the cell nucleus to make more repair enzymes, if you block that information with anti-oxidants, the nucleus won’t make those repair enzymes, making things worse.

There is a lot of information out there about antioxidant rich foods or supplements that are supposedly neuroprotective or beneficial to brain health, is all that misinformation?

Yes. There might be some situations where there might be some clinical advantage, but there have been no major clinical trials that document any benefit to longevity or health with antioxidant supplementation. What we know about biology does not support the general use of antioxidants, as ROS molecules are essential signals for cell health. For example, one major anti-oxidant is glutathione, and there are huge amounts of it naturally in all cells. When there is oxidative stress, glutathione bind together and become very reactive, changing the structure of proteins and reprogramming the transcriptional system (creation of proteins) in response to this stress, if you pump too many anti-oxidants into the cell you can impair all this signaling.

What are the benefits of involving non-specialists into specialist field?

When I was in grad school, we would always isolate mitochondria and examine them on their own. Later we realized that they behaved completely different inside their natural home, a cell. The same is true for other fields, neurology or immunology, they work almost exclusively just within their domain. What we are seeing more and more, especially in degenerative diseases, is that in the real world all of these fields are intertwined, so you can’t properly study a field like neurology without an understanding of immunology.

An immunologist colleague Michel Desjardins and I recently wrote a paper looking at the immune system in Parkinson’s. We predicted that certain infections may trigger a mitochondrial response that could lead to the death of neurons. To test it we had to bring in a neuroscientist and a microbiologist. Eventually we found our theory to be true, but we needed all the various specialties to work together to get there.

A lot of people come in wanting to be an Einstein, a singular genius that figures out some mystery of the universe by themselves, but that is just not how it works. Also, we aren’t typically rewarded for working together, as the funding system prefers to support independence. This is changing, but it remains a big deterrent. True collaboration is challenging and takes a lot of persistence, patience and courage.

What are the most important unanswered questions about mitochondria?

To me it is still all about signaling and trying to understand the true extent of their integration into the cell decision making process. People are moving into that area, but it is very early days, we really don’t get it yet.

The second biggest challenge are the research silos even within the domain of mitochondria. There are people studying just bioenergetics or protein import or calcium, that don’t really know much about the other aspects of mitochondria. That is a big challenge, we spend decades becoming specialists, but now we need to back up and work together so we can put the whole puzzle together.

Click here to learn more about the work of Prof. Heidi McBride