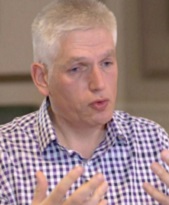 Dario Alessi is a biochemist whose research focuses on protein kinases — enzymes that chemically modify other proteins by adding phosphate groups. Dario discovered PDK1, the master kinase implicated in the development of several types of cancer, including melanoma. He is currently examining phosphorylation-mediated signalling pathways as part of long-term efforts to more effectively treat conditions such as cancer, neurodegenerative movement disorders and hypertension. By understanding how these pathways are organised and recognize signals, and how signals move down the pathway to elicit a response, Dario is expanding our understanding of what goes wrong in human disease. In 2012, he assumed the directorship of the MRC Protein Phosphorylation and Ubiquitylation Unit at the University of Dundee, where he is engaged in the Division of Signal Transduction Therapy Collaboration together with six major pharmaceutical companies. (Source: Royal Society)
_____

Is biology binary? It seems genes are either expressed or not, and RNA or proteins are either up-regulated or down-regulated. Are these over-simplifications?

My view of biology is not binary, you can get every possible shade of grey. A gene can be off or on, but you can also have every intermediate level in between. Sometimes even just a 5% difference in the level of a gene or a pathway can have a tremendous effect. For example, every day you reabsorb 3-4 kilos of salt from your urine back into your body, and you only excrete about 0.1% of the salt in your body. But if that pathway changes activity by just 5%, it means that you are either retaining or excreting too much salt and that can result in high or low blood pressure. Small differences can have an incredible impact on physiology.

I think it is the same thing in Parkinson’s disease. Everyone loses neurons as we get older, but maybe those pathways that damage neurons are accelerated by 5 or 10% in people with PD. It could be the result of a very subtle change that accumulates over decades.

There are some things that are binary in biology, like apoptosis (programmed cell death), but most of biology is gradient, and each gradient can be affected by other gradients. It is incredibly complex. Generally I think we understand less than 1/10,000 of all that there is to understand in biology. We know virtually nothing about how biology is controlled and how it works.

Is it simply that we haven’t accumulated enough information yet, or is there a fundamental gap in our understanding of how we go from DNA to human beings?
I think it is a lack of fundamental understanding of how biology is controlled. There isn’t a lot of funding to do the fundamental research on one gene or one protein that would be needed to really understand these things. You could spend your whole life studying one protein, but getting the funding to do that is hard, funding bodies want us to solve diseases and work with companies to figure out shortcuts that can be made into a drug. But we don’t have the fundamental basis that is needed to really solve these problems.

We have 20,000+ genes, each with many different variants, which are all expressed at different levels in different ways in different cells. They probably make hundreds of thousands of RNA molecules and millions of forms of proteins that get modified in a number of ways. All of these things interact and form the various parts of the cell. Also, as you interact with your environment and consume energy, DNA accumulates damage that also affects how cells function. All of this is like a big boiling pot with millions of things thrown in, you can’t really understand it.

Do you think we might be too limited to ever fully grasp biology?
We have more or less reached this state at the moment. Every day there are tens of thousands of papers being published and information deposited on websites, there is simply no way for anyone to even understand everything in their own subfield let alone how all the various pieces fit together. I don’t think the human brain can do that. We will need computers to put it together, but only they will be able to understand it. No expert will be able to put it all together in their head.

For example, there are 2000 papers on LRRK2 and some of them say completely different things. It is very hard to know what is right and what is wrong. I still think we know virtually nothing about how this enzyme functions and how it is regulated. In 10 or 20 years people will look back and laugh about what we think we now know about this protein.

Is there a tipping point that gets reached when we think we have enough information to intervene in a faulty pathway, or is it just guesswork all the way through until we stumble across the right mechanism?
In people with PD that have LRRK2 mutations we do know that the gene is causing the disease. It is crystal clear now that all the mutations in this gene switch on the pathway. We see this in the animal models that mimic the human mutation, and by examining the cells from these patients. We don’t understand the biology, but we do know that activating the pathway causes disease. Because of that we can now intervene with an inhibitor of LRRK2, which should prevent people with those mutations from getting PD, or at least significantly slow progression. But I think we have at least 10 years more to go before we really understand the pathway and can precisely manipulate it.

How does a biological target become druggable?

Most proteins are considered not druggable, we don’t know what they do in biology so we can’t develop a compound that can manipulate their function. Kinases are enzymes (molecules that accelerate chemical reactions), and they require another molecule called ATP to bind to them to carry out the rest of their functions. What drug companies are doing is making molecules that look like ATP so they can bind to the same site on the protein and inhibit the kinase’s function. What it really takes is that first person to figure out the right molecular target. In the 80’s people considered kinases undruggable, then Novartis showed it could be done and that opened the floodgates.

What are your takeaways from the massive PD genetics study that came out last month identifying 39 novel risk loci?

First, it was an amazing study, they sequenced 40,000 patients and compared them to one million controls. It is also a fantastic example of collaboration as it involved hundreds of researchers from all over the world. Together they produced a huge catalog of information that has taken the number of genetic risk factors for PD from 53 to 92, but it isn’t clear how these genes work or how significant they are. I think it will be useful once we do more biochemical analysis and come across new components that are also on this list, that would give us much more confidence that what we found is relevant to the disease.

What surprised me most is that you would think new causative genes would emerge but none came up, it was just risk factors. There are still patients that clearly have heritable forms of PD but we still haven’t been able to identify the genes associated.

How much variety is there between the various LRRK2 inhibitors and will some be better suited for certain sub-subtypes of people within the LRRK2 subtype?

At the moment drug companies are being very secretive about the inhibitors they have, so no one knows what the chemical structure of the various inhibitors is. But they will be distinct, some will be more potent than others, some might penetrate the brain better than others, some might last longer in the body, and each will have different off-target effects that can be quite unpredictable. We will probably end up with 7 or 8 different clinical trials and some might work better for certain LRRK2 mutations. Then the work will shift to finding out which patient might be best suited for which inhibitor.

You and colleagues recently showed that LRRK2 kinase inhibitors may have therapeutic value in idiopathic PD. What are the next steps that need to be taken to validate this link?

First the work needs to be validated by an independent group. After that we need to develop better tests to see if people with idiopathic PD might be able to benefit from a LRRK2 inhibitor. This would require scientists working together with diagnostic experts to develop the right set of tests to see if individuals would benefit from these inhibitors.

I note that there are 10370 publications containing the word “synuclein”, with the vast majority published after 1997, when alpha-synuclein was first linked to Parkinson’s disease. I was interested to see that there were actually 25 basic pioneering synuclein’s biology papers driven by curiosity from 1988 (first paper, published by Richard H Scheller, Stanford University, http://www.jneurosci.org/content/8/8/2804) to 1996. 1965 LRRK2 papers have been published papers since 2004 when LRRK2 was linked to Parkinson’s (only two LRRK2 cloning papers published before this).

In 2017, 1163 papers published on alpha-synuclein compared to 222 studies on LRRK2. This suggests there is 4 to 5 times the volume of work taking place on alpha-synuclein compared to LRRK2. One might therefore expect we should know much more about alpha-synuclein than LRRK2, but I am not sure that this is the case. Knowledge in a field is not just about the volume of research, but factors such as difficulty of research area and overall quality of research taking place greatly contribute to our understanding. Neither alpha-synuclein or LRRK2 are easy proteins to study. However, I am still amazed that despite all of this work, there still seems so much that we do not understand about alpha-synuclein and LRRK2 biological pathways and how these are linked to Parkinson’s disease. There are so many studies reporting conflicting findings, that is not helped by lack of validation and availability of easily accessible state of the art research tools to make it possible for outside researchers to enter the field. I often find it hard to know what is correct and what is wrong. I believe that there is still a lot to be uncovered on how alpha synuclein and LRRK2 are regulated and function.

Going forward I think we need to perhaps take a step back and develop well-orchestrated and coordinated high-quality collaborative projects bringing together leading researchers, clinicians, pharmaceutical companies and Parkinson’s patients, coupled with generation of new research tools to focus on clearly defined goals in order to address major questions. A way to independently validate findings before publication should be woven into these projects making reported data more reliable. This should lead to urgently needed transformative ideas on how to better diagnose and treat Parkinson’s.