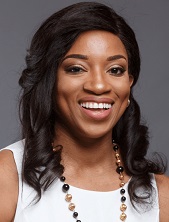 Omotola Thomas, a self-proclaimed "reckless optimist", was diagnosed with Parkinson's disease (PD) in 2016, at 35. Although born and raised in Nigeria, she has also lived in America, South Africa, and most recently, England, where she currently resides with her husband and two children. While in America, she obtained both her bachelor's degree (in Systems Engineering) and her master's degree (in Project Management) from the George Washington University. She is a blogger and the founder of ParkinStand – a movement established to inspire people to engage in empowering physical and mental activities. She believes strongly in the power of a positive mindset and promotes that message through ParkinStand. A passionate Parkinson's activist, she volunteers extensively for Parkinson's charities and related causes. To find out more, visit: parkinstand.com.

The following has been condensed and paraphrased from an interview with Omotola Thomas on February 12, 2019.

Could you talk about how you came to be diagnosed with Parkinson's disease?

My diagnosis story spans three continents. My symptoms first started with a slight tremor in my right hand when I was living in the US in 2010. I saw a number of neurologists and went through a lot of different tests. Presumably, because of my race, gender and age, no one mentioned Parkinson’s disease. Then I moved to South Africa in 2013 and went through the process again. At the end of 2015 one of the neurologists there was the first to mention that I might have some form of Parkinsonism. He suggested that I travel to the UK to get tested by a movement disorder specialist. Coincidentally my family was already planning on moving there. The next year I saw a specialist in London and the day after he diagnosed me with Parkinson’s.

You have since spent some time in your home country of Nigeria looking into the state of Parkinson's disease, could you give some sense as to what healthcare and Parkinson's is like there?

Like most developing countries, healthcare is still in the process of developing in Nigeria. I have gotten to know Dr. Njideka Okubadejo, the chair of the African Steering Committee of the International Parkinson’s Movement Disorder Society, she has given me a sense of the state of care in Africa. Parkinson’s is not very well understood there, it presents a lot of challenges because culturally people do not talk about their illnesses, but unlike other diseases, PD is not something you can hide, that makes it a particularly difficult illness to manage in Africa.

For example, I went to the passport office while I was back in Nigeria. It was a crowded room and everyone was staring at my shaking hands. I was prepared for it but I can only imagine what it must be like for someone who lives there all the time and just wants to go to the grocery store or go to church. There are so many stigmas associated with an illness like this.

Could you elaborate a little on those stigmas?

Yes, I just watched a video of Hellen Mwithiga, founder of the African Parkinson's disease foundation in Nairobi, Kenya whose father died with Parkinson's. People in her community believed he was under a spell or possessed by demons or that her mother had done something to get access to his will.

My own experience was this: after I got diagnosed, I got pulled in many different directions from well-meaning friends and family members about what religious steps I should take and I found it difficult to respond in a way that would not be considered offensive to them or my own personal faith.

Because so many people are averse to talking about conditions like Parkinson's, many do not seek care. Also, most people cannot afford the medication, many of them live on less than two dollars a day, Sinemet (the primary medication for PD) alone would take up most of that.

There is also the issue of competing government agendas. Almost all of the money spent on healthcare in Africa goes towards combating infectious diseases. There are government funding projects and subsidized healthcare for people with conditions like Malaria, HIV or TB, but that leaves these healthcare systems with little to no resources for other conditions.

Could you give some sense of what the state of science and research is like in Nigeria?

I wouldn't say it is non-existent, but there could definitely be a lot more. I am co-organizing an awareness campaign, and one of the goals, besides raising awareness and education, is to call out the international community to divert some of their resources towards Africa as there is very little support for any such work in the continent. There is a void that the international community needs to fill.

Is there anything specific you would want to see from the international PD community?

One of the biggest challenges in Nigeria, and in most of Africa, is access to medication. By access I mean making the drugs affordable, available and acceptable. I heard of someone shipping medication to Africa that were either at or passed their sell-by date, if it is not okay for people in the West to use these drugs why is it acceptable for Africans?

There also is a great need for more information and better training for healthcare professionals. In 2016, there were roughly 80 general neurologists, in Nigeria, for a population of 182 million (source); in Kenya there were 20 neurologists for 43 million people (source).

Let me tell you why the international community should care about this: Nigeria, with a population of almost 200 million, is the seventh most populous country in the world, approximately 5% of them are over the age of 65 and the incidence of PD is estimated to be 1% for those 65 and above, if you crunch the numbers, that is a lot of people with PD who aren't being properly cared for. I want to make PD in Nigeria and the rest of Africa a global health crisis.