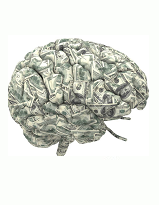 The results of the billion dollar writing challenge are in! Thank you to all who participated, we received a lot of outstanding essays that have already sparked some interesting discussions about the future direction of Parkinson’s disease research.

But, without further ado, here are the winners as selected by the steering committee for the Krembil Knowledge Gaps in Parkinson's Disease Sympostion 2019, Revision vs. Reconstruction.

In 500 words or less, describe how you would spend a billion dollars for the sole purpose of accelerating the production of knowledge about Parkinson’s disease and/or the translation of that knowledge into disease modifying therapies?

(Receiving free registration, hotel and $500(CAD) towards a flight to Toronto for the Revision vs. Reconstruction Symposium)

Developing a drug for neurodegenerative disease has been an incredible challenge and finding new ways to access or develop successful disease-modifying therapies are imperative to overcome some of our current research and drug development challenges. Within these lines, research into Parkinson’s disease (PD) requires a more integrative approach, combining expertise from metabolic, immunological, microbiological, neurological and epidemiological fields in conjunction with novel and rapidly evolving “omics” or machine-based learning strategies. Such an integrative strategy will allow: (i) the development of individual PD risk profiles for disease prevention; and (ii) identify PD subtypes for disease modification.

Early disease detection and prevention will focus on disease predictors that can be identified through risk assessment and individual screening. A PD risk profile is based on:
◾Genetic risk assessment will screen individuals for all known genetic PD risk factors.
◾Health assessment will focus on early disease markers. Non-invasive tests (e.g. smell detection and microbiome testing) that identify some of the earliest changes in predisposed individuals. A health assessment will screen for any existing auto-immune conditions or metabolome changes that might further increase an individuals’ risk for developing PD.
◾Trigger identification or external risk assessment, that will only screen high risk individuals for environmental factors such as pollutants or pesticides but also bacterial or viral virulence factors, acute inflammatory immune activation and early peripheral ɑ-synuclein accumulation.

By constructing a comprehensive and integrated PD risk profile with the help of machine-based learning to identify and predict risk, drugmakers will be allowed to focus on individualized preventive-type disease-modifying trials. Ideally, within this first therapeutic window, people with a high-risk profile will receive treatment before or during onset of prodromal symptoms.

A second method, that will work in conjunction with early detection and preventive measures, is based on the detection of specific PD biomarkers that become detectable during late prodromal stages but before the onset of irreversible motor deficits. Assays for example may include protein misfolding cyclic amplification assays (PMCA), centrally acting conformation-specific ɑ-synuclein PET tracers or clinical assessment of REM-sleep behavioral deficits. These biomarkers can further predict disease progression and severity, which allows stratification and develop therapies tailored to specific PD biomarker-based subtypes.

Because of today’s need of a successful disease-modifying therapy, we have to shorten the current drug developmental cycle via identification of existing drugs that can be repurposed for PD. Rational selection of drugs is already a promising strategy but could be further assisted by predictive algorithms through bio- and chemoinformatics that can integrate biological and chemical target information within three major domains: inflammation, metabolism and ɑ-synuclein aggregation.

Collectively, via an inter-disciplinary and complete approach we can accelerate not only the development but also the detection and prevention of PD. We need to select and develop novel preventive and disease-modifying drugs and time their application carefully to stop or even reverse disease progression.

I would divvy up the money such that the money would go to the most number of labs possible. Science, especially hard problems like PD, require many people testing many, many different hypothesis. Anybody with a reasonable hypothesis to test about Parkinson’s should get some funding. If every lab got 500,000 dollars, we would still be able to test TWO THOUSAND ideas. For complicated problems, science progresses by the proverbial “throwing tons of things at a wall and seeing what sticks”. Right now, grants tend to be handed out to a few “select” scientists by a grant review board made up of other “select” scientists. The same old people get to set the agenda and the same old ideas get tested (mostly). I don’t mean the above disrespectfully – we all get used to thinking within familiar patterns and groupthink is ever-present in our field

Don’t fund 20–30 select scientists. Fund hundreds or thousands of them. Fund small-scale science. Giant consortia have amazing ideas but they are incredibly inefficient. Small focused groups, endowed with the freedom that large, long term funding provides, can achieve a lot. And we should fully expect many of these to be failures and that is fine too.

The PD field needs some fresh blood and direction and we have to amplify the ideas and voices are scientists we do not hear from – somewhere out there is a collection of fantastic (and currently outlandish sounding) ideas about how to tackle PD. That’s what a billion dollars could do.

Second thing I would do: 25–50% of the funding would go to scientists with the express task of trying to DISPROVE the common ideas in the field – synuclein pathology is crucial for PD, dopaminergic loss in SNc is the key feature of PD, etc. Our commonly held ideas must be strongly stress-tested. These ideas have become cannon because of their historic nature or because leading scientists are attached to them. For ideas such as these, there is no means of trying to disprove them without incurring the wrath of the majority in the field. But many of these ideas are largely group-think. And cognitive biases like confirmation bias do not allow us to often see the weaknesses of our commonly-held beliefs. We can’t wait until five or ten failed Phase III trials before we dispense with ideas that hold the field back. Let’s set out expressly to challenge our existing beliefs. Currently, our research system does not incentivize work that aims to confirm existing knowledge and test whether a particular concept is valid across contexts (different cell types, different organisms etc). Give people money and tell them that they don’t have to worry about finding something “novel” – their only task is to try as hard as possible to disprove a foundational idea in the field.

And if certain concepts pass our “stress-test”, then the field as a whole will be better off. This is a win-win.

In 1817, James Parkinson described the “shaking palsy” in an essay that was lauded for dispassionate expository and attention to the intricacies of clinical manifestation. As an observationalist, Parkinson set the standard for over two centuries of groundbreaking discovery, investigation, and treatment for Parkinson’s disease (PD) patients. However, the vitality and impetus of Parkinson’s research since has often been stymied by monetary limitations. The prospect of $1 billion intended for producing knowledge of PD, and using that knowledge for patients, eliminates a number of obstructions that inhibit the unfettered potential of some of the brightest minds in neuroscience. However, to fittingly spend $1 billion to benefit the patients that live with PD, we must invoke the spirit of James Parkinson and make honest observations about what roadblocks exist and how we can maneuver (fund) around them. Here are three observations that would collectively welcome $1 billion:

Observation 1:
There is significant deficit in the reproducibility of results regarding pre-clinical entities that are brought to clinical trial without proper reinforcement or validation.

Funding Opportunity: Designate multicenter pre-clinical development grants in tandem to independent research groups. In order for an institution to be funded to investigate a lead therapeutic or treatment, alternate and independent research institutions would be held responsible to replicate experimental paradigms of the initial findings. These validation arms may be run in staggered fashion to prevent the potential for redundant negative results or hitless investigations. Upon completion, joint grant recipients would evaluate results, assess pitfalls and improvements, and make recommendations for course of action.

Observation 2:
Efforts to treat the heterogeneous population of PD patients in whole has left us with failed clinical modalities.

Funding Opportunity: Attack the heterogeneity. It is time to follow through with the long-held hypothesis that different disease mechanisms or causative combinations of pathologies, genetics, and environment/lifestyle result in protean clinical Parkinsonism. As such, funding should be poured into discovering and developing reproducible biomarkers that cater to individual patient susceptibilities—the precision medicine gateway. From the earliest cell transplantation studies to the recent Phase II GDNF trial, optimism and promise drawn from cohorts of patient responders have left us frustrated with the overall failure to reach successful clinical endpoints. However, imagine if we could effectively stratify patient subsets into trials for therapeutic modalities tailored to their individual disease signatures. Fine-tuning clinical trials to patient subsets is an expensive concept. Integrating and curating patient data sets in such an expansive platform will be costly. But so is treating Parkinson’s disease, especially unsuccessfully.

Funding Opportunity: Let’s forget the money. Even without $1 billion, perhaps the primary call to action is to be trailblazers in tearing down scientific walls and dedicating ourselves to team science. These observations are not diagnoses of what ails the PD community alone, but are tribulations for the biomedical science community at-large. James Parkinson taught us to observe—it is up to us to react.

If you are wondering what our blog author Benjamin Stecher would do with the money, see this blog post!