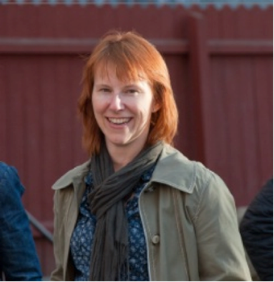 In October 1984, a thirteen-year-old girl called Sara sat in a small village hall in northern Sweden enjoying a folk music concert. “Everyone was clapping their hands and stomping their feet,” Sara recalls, “and I wanted to do the same. I could clap my hands, but when I tried stomping my feet, I discovered I couldn’t. It was as if the signals couldn't go from my brain to my feet.” This is Sara’s earliest memory indicating that something was wrong.

In the years ahead, Sara’s mother, too, noticed her teenage daughter moving differently from her peers. Sara, she observed, struggled when riding a bike, buttoning a sweater, or tying shoelaces and also dragged one of her feet when she walked. The school physician sent Sara to a neurologist, who after initially dismissing her symptoms as psychosomatic settled on a diagnosis of “generalized dystonia,” a lifelong affliction where muscles contract involuntarily.

Sara lived with this diagnostic label for the next 16 years. She studied chemical engineering and went on to work as an environmental consultant specializing in environmental risk analysis. Then in 2000, Sara’s neurologist — on learning that there was a clinical subtype of dystonia that responds to levodopa — suggested she start taking that drug. The impact was astonishing. Within days, her muscles relaxed and she could move much more fluidly. Says Sara, “the levodopa had a tremendous effect. Basically I had a new life, it was amazing.”

Sara felt so well — essentially “cured” of her dystonia — that she and her husband decided to start a family, and in 2003 they had a daughter, Frida. Then something unexpected happened. Sara, now 32, went to see yet another neurologist who, rather than accepting her medical history, examined her anew. His verdict was shocking. He told Sara, “you don't have dystonia, you have Parkinson's disease.”

Sara’s life was shattered. “I fell down into a black hole.” After thinking she had been effectively cured, Sara — now caring for a baby just a few months old — had learned she had an incurable neurodegenerative disease. Sara has her own version of the stages of grief that individuals pass through when coming to terms with an incurable illness: her five include shock (at hearing the news); sorrow, (that's mourning the future you won’t now have); searching (for information); sharing (that’s supporting your patient community), and finally shaping (making your own future again). The first time Sara made this journey from “patient with generalized dystonia” back to “person” it took her, she says, about 16 years. Now she had to go through the transformation again for Parkinson’s disease.

This time it was much quicker. For two reasons. Firstly, she’d done it before. Secondly, the world had changed. “In 2003,” she says, “there was lots of new technology not around in 1987 — there was the Internet, there was Google, there was Facebook. Information was everywhere and it was very easy to get yourself educated and connect yourself with other interested parties.” Sara has rebounded from the shock of her Parkinson’s diagnosis; she’s become a thought leader among parkies in a new age of social media. Sara Riggare not only went back to school, to Stockholm’s Karolinska Institute, to work on her masters and doctorate in health informatics, but also became an entrepreneur.

Riggare passionately believes that patients need to be much more involved in their treatment; that they should take ownership of their disease. The clinical status quo, she argues, is unacceptable, especially for chronic diseases like Parkinson’s. Like most people with Parkinson’s, Sara sees her neurologist every six months for a 30-minute session, and thus spends about one hour in total per year being observed. That leaves, she says, 8,756 hours per year of self care; time when she and others with Parkinson’s experience symptoms, but when nobody’s paying attention.

Sara realized that the same technologies that enabled Google and Facebook offered patients some transformative possibilities for better monitoring their health. She set out to adapt inexpensive consumer products like Fitbit and Jawbone — which use microscopic gyroscopes, accelerometers, and magnetometers to track fitness — so that people with Parkinson’s disease could better understand and control their condition. And she used herself for a pilot study.

Sara has no tremor but suffers from rigidity, bradykinesia, posture, and gait problems. She takes multiple drugs (MAO inhibitors, COMT inhibitors, dopamine agonists, and levodopa/carbidopa) in multiple combinations, multiple times a day. “Everything I do comes down to my medications, so I want to know how to quantify their effect, so I can figure out when to take them.” So she developed one Phone App to remind her to take and to record when she took medications and another App to measure the number of finger taps she could perform in 30 seconds. This simple tapping test gives a rough composite measure of rigidity and bradykinesia. Then she plotted the data. “I found that I actually had a pattern that repeated itself day after day.” She discovered she had a dip — a slow time — around lunch, when her tapping rate went down, and she wondered if by tweaking the medication schedule it could be fixed. “So I moved my dose from 11:30 AM to 11 AM and added a dose of COMT inhibitor, and that small change of half an hour made a huge effect on how my body reacted.”

Working with a business partner, Riggare is developing a smart phone application that other Parkinson’s patients can use to learn more about the specific patterns of their disease. Of course Sara isn’t the first to think of this. There are a number of expensive proprietary systems under development including the European SENSE- PARK project, the Cleveland-based Great Lakes Neurotechnologies, APDM in Portland, Oregon, and Global Kinetics in Melbourne, Australia. These companies are working on various combinations of advanced wearable sensors (worn on sites like the wrist, waist, and ankle), which track multiple domains — bradykinesia, tremor, walking, gait, balance, cognition and more. They are hard at work fashioning algorithms to extract meaningful metrics from the data. Most of these technologies are designed to be used in the clinic, under the control of a neurologist. And the companies’ business models are based on anticipated revenues from traditional Parkinson’s care and FDA regulated clinical trials.

Sara sees her goal as different. “My mission is to give individual patients the tools to improve their own healthcare experience. I need to show that my research can change things for me and for the world, and that it can make an immediate benefit, not in 10 or 20 years.” Interestingly, such ideas of a more personalized, patient-driven healthcare system find support outside of mainstream medicine. A number of powerful constituencies get very excited by the concept of wearable sensors: from Silicon Valley entrepreneurs making smart devices for the health and fitness market to proponents of the “quantified self” movement (a community where individuals seek “self knowledge through self tracking”), to scientists interested in amassing and analyzing “big data”.

Inside the biomedical research community, by contrast, such ideas get a cooler reaction. In the traditional medical model trained researchers do research, qualified clinicians practice medicine, and patients participate in clinical trials — they don’t study and manage their own healthcare.

But clinicians and researchers might be wise to take notice. History shows that “disruptive” change tends to come from the outside. Just as the music industry didn’t invent Spotify, and the phone company didn’t invent Skype, so it’s unlikely that clinicians and biomedical researchers will be the ones to tear down their existing biomedical infrastructure and replace it with something different. Of course, those disruptive outsiders, whoever they are, can expect to face resistance. As the personalized genetics company 23 & me discovered, there are lines that entrepreneurs cannot yet cross without attracting FDA censure.

Sara realizes that she’s not allowed to practice medicine. “For now we speak of it as being a support for your physician.” On the other hand, she insists that the eventual goal is to give patients the power to “take their health in their own hands…the patient will always be the owner of their health data, it is up to them to share it or not share it as they wish.”

I was diagnosed with Parkinson's disease a year ago at the age of 67. For several months I had noticed tremors in my right hand and the shaking of my right foot when I was sitting. My normally beautiful cursive writing was now small cramped printing. And I tended to lose my balance. Neurologist had me walk down the hall and said I didn't swing my right arm. I had never noticed! I was in denial for a while as there is no history in my family of parents and five older siblings, but I had to accept I had classic symptoms. I was taking amantadine and carbidopa/levodopa and was about to start physical therapy to strengthen muscles. Finally, I was introduced to Kycuyu Health Clinic and their effective Parkinson’s herbal protocol. This protocol relieved symptoms significantly, even better than the medications I was given. Visit ww w. kycuyuhealthclinic. c om. After First month on treatment, my tremors mysterious stopped, had improvement walking. After I completed the treatment, all symptoms were gone. I live a more productive life. I was fortunate to have the loving support of my husband and family. I make it a point to appreciate every day!