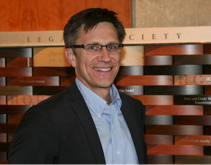 Swedish neuroscientist Patrik Brundin keeps a picture of his father on his office wall as a reminder of why he became a Parkinson’s disease researcher. In 1974, when the Brundin family lived in Darlington, in the north of England, a local neurologist Dr Saunders diagnosed Patrik’s father, Bertil, with Parkinson's disease. Bertil Brundin –-an executive for a Swedish lawnmower company called Flymo–- was put on the just released medication, L-dopa. Patrik remembers his mother asking the neurologist “would it arrest the disease”? To which Dr. Saunders blushed and said, “I'm sorry we don't know anything about this yet.”

The next year, following a downturn in the lawnmower business, Flymo fired Bertil Brundin.  The family returned to Sweden, but in 1978, Patrik obtained a scholarship allowing him to return to the UK to attend the boarding school Atlantic College in Wales. He spent two years there studying for his international baccalaureate, for which he was required to write an "extended essay". The 17-year old Patrik Brundin told his biology teacher that he wanted to do his project on Parkinson's disease research. The teacher referred Patrik to the school doctor, who passed him on to a neuropharmacologist Professor John Davis at nearby Cardiff Heath Hospital. “Frankly,” says Patrik, “I didn't even know what a neuron was… but (I had heard on the radio in Sweden during my summer vacation) that a team from the Karolinska Institute working with an American group had transplanted brain tissue into rats with Parkinson's disease.”

After spending a few days in the university library, Patrik told Professor Davis he wanted to develop an animal model of Parkinson's disease. His teenage logic was direct if ambitious. “I’d read that manganese miners in South America could get Parkinson like symptoms from manganese poisoning… so I started in August 1979, feeding manganese chloride––that I’d dissolved in the drinking water–– to rats. I came back in December to analyze them and found that they had developed movement problems… “ Patrik's article about his animal model, which he wrote by hand with an ink pen, was eventually published in a Pergamon press journal called “The Project,” which highlighted some of the essays from Atlantic College every year.

After passing his international baccalaureate, Brundin returned to Sweden to study medicine at Lund University in 1980. There, by luck, he met Anders Björklund, a pioneer of neural transplantation—who also taught histology to the first year medical students. Within months, Björklund had become Brundin’s mentor and from that moment, Patrik recalls, “I never looked back.” He took a break to do a PhD in the middle of his medical studies, joining Björklund to work on a remarkable series of neural tissue grafts aimed at reversing the symptoms of Parkinson’s disease. The operations were highly controversial because the transplanted neural tissue came from aborted fetuses.

The first of the operations took place in Lund in November 1987. Surgeon Stig Rehncrona prepared “Patient One,” a 47-year old woman, for surgery. Patient One had contracted Parkinson’s aged 33 and could now move for only a few hours each day. Rehncrona used a technique called stereotactic surgery, which involved screwing a giant frame onto the patient’s head. He then set the coordinates on the frame to target a precise brain region. Using the precision frame and manual calculations (in the pre-laptop era), he could reach any target in the brain through a single small hole in the skull.

Patrik Brundin sat in another room peering through a microscope and dissecting the fetal tissue. It was a tricky procedure. An 8-week old fetus is about the size of a fingernail.  Brundin was only interested in the fetus’ substantia nigra—a structure marginally larger than the head of a pin. His task was to dissect those cells whose destiny was to make dopamine. After two hours of painstaking work, Brundin delivered the immature dopamine nerve cells from four fetuses to Rehncrona who carefully transplanted them into Patient One’s striatum.

Over the next 12 years, 18 fetal tissue cases were done at Lund and more than three hundred worldwide. While, some patients got little benefit, there were some striking successes. For example, Patient Number Four from Lund was grafted only on one side, and in 1999, a PET scan of that side showed that the brain region was producing normal levels of dopamine. Remarkably, the patient was off all medication and his condition reversed "by about ten years" so that he could return to an independent life. Further evidence of transplant success came when two patients grafted in the USA died of causes unrelated to surgery. Their brain tissue was sent to Rush University neuroscientist Jeff Kordower in Chicago. Kordower confirmed there was no doubt the transplants had worked. “The grafts,” Kordower said, “ were huge, tremendous enervation, synapse formation, metabolic enhancement, and so from an anatomical point of view, everything we hoped to find we found.” Despite the promising initial results in open label studies, however, two negative US double blind sham surgery trials (in 2001 and 2003) brought the field to a virtual standstill. The studies suggested that the clinical benefits were largely placebo-generated and raised concerns about graft-induced dyskinesias.

A decade after the two devastating studies, I visited Patrik Brundin in his new home: Grand Rapids, Michigan. The scrupulously polite Brundin, a lanky, youthful looking 50-year-old, had just been appointed Director of the Center for Neurodegenerative Science and Head of the Laboratory for Translational Parkinson's Disease Research at the Van Andel Institute. Grand Rapids, a town once known for its furniture factories, seems a long way both culturally and geographically from Lund, Sweden. The Institute, named after the Grand Rapids entrepreneur Jay Van Andel, is housed in a striking building set into a hill. It sits on the edge of a medical area, which, thanks to a billion dollars of philanthropy, boasts a dozen world class research and clinical facilities: including the Helen DeVos Children’s Hospital, the Meijer heart Center, the Lemmen-Holton Cancer Pavilion, the GVSU Cook-DeVos Center for Health Studies, the Calkos Science Center, Spectrum Health System, and more. There is so much concentrated medical excellence on display that Michigan State University chose to move part of its medical school there. Now Patrik Brundin had been invited to create a world-class Parkinson’s research center.

Despite moving to the US, Brundin is still bitter about the American rejection of the neural grafting research that occurred over 10 years ago. As he told me, the year 2001 was “a difficult time for the field, the first NIH sponsored clinical Parkinson transplantation trial came out negative, even reporting severe side effects of the grafted cells in some cases, and the NIH funding for embryonic stem cell research was banned.”

Brundin still believes that neural grafting has a future. But the center he is building will seek the best researchers to explore every promising research niche from basic studies of protein chemistry to drug, vaccine and gene therapy development. He is currently very interested in the idea that in Parkinson's disease an abnormal form of a brain protein, alpha-synuclein, is transported between brain cells and this is the reason the patients deteriorate over the years. Ironically, some of the evidence for this idea came from Parkinson neuropathology in transplanted brain cells, observed in two of the Lund patients who had passed away 10-15 years after surgery.

In the new Parkinson center at the Van Andel Research Institute, Brundin is planning to recruit around 10 new Parkinson research group leaders and organizing them into three clusters. One will research biomarkers that can help predict who will develop Parkinson's disease. A second will try to identify new therapies that slow down disease progression. Finally, a third cluster will focus on brain repair, using an approach similar to what Brundin worked on as a PhD student, primarily transplanting neurons made from stem cells derived from skin tissue, a novel technology that won Dr Shinya Yamanaka from Japan a Nobel prize in 2012.

Brundin’s direction in life was set when his father contracted Parkinson’s. From schoolboy to medical student to researcher to senior scientist he has followed a career path that allows him to keep working on his goal: a cure for Parkinson’s disease.