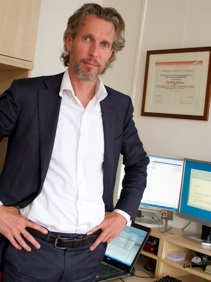 In the dramatic open to his 2011 TED talk, “From God to Guide,” neurologist Bastiaan “Bas” Bloem is lifted high above the stage by a crane to the sound of celestial music. Far below, a patient asks him for help. Bloem tersely tells the patient he has Parkinson’s disease and orders him to take carbidopa/levodopa three times a day. But the patient is not satisfied and complains in desperation, “Doctor you must take me seriously”. In the TED talk, Bloem comes down to Earth and joins his patient on the stage. They sit down and talk as equals. In real life as well, this is something Bloem believes passionately all neurologists should do with their patients.

Meet Bas Bloem — one of the most patient-centered neurologists in the world. Before training as a clinician, Bloem considered a career as a professional volleyball player. He was good enough and he was certainly tall enough. But in the end, for personal reasons, he opted for medicine. “I chose to go to medical school,” says Bloem, “because my mother had multiple sclerosis. From my first days as a child, I saw first hand what neurological disease was like. My dream was to cure my mother.”

Bloem, who resembles a younger, taller, and more disheveled version of the actor Sam Shepard, did go on to make a major contribution to the treatment of neurodegenerative disease, but it turned out to be in Parkinson’s rather than in MS. And the reason, according to Bloem, was sheer coincidence. After studying at the University of Leiden, he began looking for advanced training opportunities. “I soon realized that to obtain a residency in neurology you needed international experience. So, when I asked my boss for any opportunities abroad, he said that the California neuroscientist Bill Langston happened to be visiting next week and that he would introduce me.” Bill Langston had famously discovered a neurotoxin (called MPTP) in a bad batch of synthetic heroin, which had caused a group of young California drug addicts to contract Parkinsonism. Bloem recalls that fateful meeting in 1989. “My boss said, ‘Dr Langston, this is Bas Bloem. He is a former semiprofessional volleyball player.’ To which Langston said, ‘I'll hire him.’”

Once in Sunnyvale, California, Langston (in addition to encouraging his volleyball) asked the 21-year-old Bloem to study posture and reflexes in both the MPTP patients and in individuals with regular sporadic PD. Bloem was captivated by the complexity of the disease and from that point on he says, “Parkinson's disease never let me go. I've dedicated my life to it.” As Bloem finished his long neurological education in Holland and the famous National Hospital for Neurology (Queen Square, London England), he became convinced of one central truth. While the classic Parkinsonian symptoms of rigidity, tremor, and bradykinesia are mediated by dopaminergic systems in the brain, and respond to levodopa treatment, this wasn’t true for posture and balance deficits. Those disabling symptoms involve damage to other brain regions and, logically, might be amenable to other therapeutic interventions.

As a volleyball player, Bloem had developed a huge interest and belief in physical therapy (which is called physiotherapy in Europe). Says Bloem, “I was eager to demonstrate that physiotherapy — which is based on the idea of helping patients to compensate for their disability — would be a better treatment of gait and balance than just L-dopa.” Again, what happened next was pure coincidence. Bloem joined a statistics course being held on one of the small islands in the north of Holland. As it happened, his roommate was a physiotherapist and scientist called Marten Munneke. As Bloem recalls, “students were given the task of designing a trial so Marten and I said, ‘why don't we design one for Parkinson's disease and the influence of physiotherapy?’”

Almost immediately, they saw a problem. Very few Dutch physiotherapists were trained to work with Parkinson’s patients. “Back then, physiotherapy in Holland basically reminded us of homeopathy: care was strongly diluted, with every therapist typically treating only a few Parkinson’s patients, and this kept them from acquiring sufficient expertise with this complex disease. Parkinson’s patients complained that the emphasis was on drugs and deep brain stimulation and rehabilitation was neglected. “So, Bas and Marten decided that before they could run their trial they would have to set up a program to train physiotherapists and other health professionals. This led to the radical idea of ParkinsonNet. Instead of neurologists delivering episodic care in hospital settings, Bas and Marten (who had become firm friends) planned to build a national network of highly trained health professionals capable of treating PD patients in the hospital, community and the home. ParkinsonNet started in 2004 in the cities of Nijmegen and Arnhem with 19 physiotherapists, nine occupational therapists and nine speech therapists.” Today, with 66 regional networks, 2970 trained professionals, (including neurologists, physiotherapists, pharmacists, psychiatrists, and occupational therapists) and some 50,000 patients, the program covers the whole of the Netherlands.

To start with, it was a hard sell. Bloem recalls, “At the beginning many neurologists were reluctant to participate. They didn't believe in the merits of allied health interventions, and in truth they had a point, because there actually wasn't much evidence for it.” But after a decade of use, there is hard data. In the March 19, 2014 on-line edition of the British Medical Journal, Bloem and Munneke summarize what ParkinsonNet has accomplished. By treating patients using trained experts in the community rather than hospitals, ParkinsonNet saves some $28 million annually. It’s also produced better health for patients — one large observational study found a 55% decrease in hip fractures in cohorts treated in ParkinsonNet regions. For Bloem, it’s an example of a new collaborative culture of care where “specialized professional and engaged patients work together to try to achieve optimal outcomes.”

As Bloem tells the patient at the end of his TED talk, the brain has weird and wonderful capacities for compensatory action. Our brains are full of surprises. He relates the story of a severely impaired 58-year-old male Parkinson patient who showed up in his clinic manifesting severe freezing of gait, (Video 1), but who happened to mention that he rode his bicycle every day. Listening to (rather than dismissing) his patient, Bloem asked the man to go outside, gave him a bicycle, and, as if by magic (Video 2), the patient started riding. He gracefully cycled about 100 meters away, fluently turned his head to check for cars and pedestrians, executed a smooth 180 degree turn and cycled back to where he started, even standing up on the pedals to cycle up a small incline.

Just what is going on is not clear. Says Bloem, “my short explanation is that I just don't know. But people with Parkinson's are able to produce movements where automaticity has not been lost.” Since the case was featured in the New England Journal of Medicine, Bloem has received hundreds of emails about compensatory mechanisms. It all points to one conclusion says Bloem. “Doctors must descend from their Ivory Towers and listen to their patients.”