Amsterdam, NL – The Journal of Parkinson's Disease and its publisher IOS Press are proud to announce the two articles that have won the first Parkinson Prize, recognizing these outstanding contributions to the advancement to Parkinson's disease research. Recipients of the award are lead investigator Thomas Foltynie, MD, PhD (research article) and co-authors Heiko Braak, MD, and Kelly Del Tredici, MD, PhD (review article).

These papers were selected by members of the Journal of Parkinson’s Disease’s Editorial Board from among 461 research articles and 153 review articles published between the journal’s launch in 2011 and 2019. Awardees will receive a commemorative plaque and a cash award of $1,000 (per article). The Parkinson Prize will continue as an annual award, and in 2021 an article published in 2020 will be selected.

Importance of the Work

The Foltynie study adds confidence that the potential beneficial effects of exenatide for the treatment of Parkinson’s disease may be related to more than transient symptomatic benefits. The trial participants, who used exenatide for one year as part of the investigators’ first trial, were reviewed a year after stopping exenatide, and their “off dopaminergic medication” video assessments remained improved compared to participants who were randomly assigned to the control group.

“We have learned that careful long-term follow-up can be hugely instructive and have embraced the long-term follow up strategy in the evaluation of exenatide in our current phase 3 trial. My co-investigators and I are very honored that the Journal of Parkinson’s Disease has chosen to recognize this article in this way,” commented Prof. Foltynie.

Prof. Braak and Dr. Del Tredici review the development and rationale for the six-stage staging model they proposed for brain pathology related to sporadic Parkinson’s disease (Neurobiol Aging 2003) and ensuing controversies. This staging model continues to fuel discussions as well as new hypotheses and new experimental models pertaining to the pathogenesis and pathomechanisms of Parkinson’s disease.

“Neuropathological staging of protein misfolding disorders helps to provide insights into the regional distribution of pathology, its potential systemic spread or propagation along neuroanatomical connectivities, and the selective vulnerability of specific types of neuronal and non-neuronal cells, whereby the prion-like concept of the synucleinopathy and the theory of selective vulnerability in Parkinson’s disease are by no means mutually exclusive,” explained Prof. Braak and Dr. Del Tredici. “We would like to thank the Journal of Parkinson’s Disease Editorial Board members for their recognition of our work.” Prof. Foltynie trained in medicine at UCL. After qualifying in 1995, he worked in Addenbrooke’s Hospital in Cambridge. From 1999 to 2003, he undertook his PhD in Cambridge looking at the heterogeneity of Parkinson’s disease, describing differences in cognitive abilities between patients under the influence of various genes including COMT and BDNF, and tau. He finished his neurology training between Addenbrooke’s Hospital, Cambridge, and the National Hospital for Neurology and Neurosurgery in London before taking up his consultant clinical academic position in London in 2008. He was promoted to Professor in 2016. A native of Kiel, Heiko Braak, MD, completed medical school at the University of Kiel, receiving his doctorate in 1964. After the habilitation in anatomy (1970), he became Professor of Anatomy in Kiel (1974). As Visiting Professor of Neurology at Harvard Medical School (1978), he worked with Prof. Norman Geschwind and published the monograph Architectonics of the Human Telencephalic Cortex (1980). He directed the Institute for Clinical Neuroanatomy, Dr. Senckenberg Anatomical Institute at Goethe University Frankfurt/Main (1980–2002). After retiring from university teaching, he was appointed Guest Researcher (2002–2009) at the Anatomical Institute until moving to Ulm University (2009), where he is Senior Professor and co-group leader of the Section Clinical Neuroanatomy (Department of Neurology, Center for Biomedical Research).

Prof. Braak is a member of the German Academy of Sciences Leopoldina (Halle/Saale) and the 2014 recipient of the Robert A. Pritzker Prize for Leadership in Parkinson’s disease Research (Michael J. Fox Foundation). In 2018, he was awarded the Federal Republic of Germany’s Great Order of Merit. His research interests include neurodegeneration, Alzheimer’s disease, Parkinson’s disease, amyotrophic lateral sclerosis, and pathoarchitectonics of the human cerebral cortex. He was married to Prof. Eva Braak until her death in 2000 and is now married to Kelly Del Tredici. A native of San Francisco, Kelly Del Tredici, MD, PhD, came to Germany on a Frederick Sheldon Traveling Fellowship from Harvard University (1989) after studying at Loyola University of Chicago and Fordham University. She completed medical school at the Goethe University Frankfurt/Main, receiving her doctorate in anatomy there in 2004. Following medical residency at the Clinic for Psychiatry and Neurology in Winnenden (near Stuttgart), she became a postdoctoral fellow at the Dr. Senckenberg Anatomical Institute (Institute for Clinical Neuroanatomy, Goethe University) in 2006. She moved to Ulm University (2009), where she is co-group leader of the Section Clinical Neuroanatomy (Department of Neurology, Center for Biomedical Research). She is a member of Phi Beta Kappa. Her research interests include neuroanatomy, neurodegeneration, Parkinson’s disease, Alzheimer’s disease, and amyotrophic lateral sclerosis. Kelly Del Tredici is married to Heiko Braak.

“The entire Editorial Board is delighted to formally recognize these important contributions to the literature on Parkinson’s disease and is honored to have the opportunity to publish such significant work in the Journal of Parkinson’s Disease,” stated Editors-in-Chief Patrik Brundin, MD, PhD, and Bastiaan Bloem, MD, PhD.

Click here to view more information about the Parkinson Prize.

About the Journal of Parkinson Disease
Celebrating its 10th anniversary in 2020, the Journal of Parkinson's Disease (JPD) is dedicated to providing an open forum for original research in basic science, translational research and clinical medicine that will expedite our fundamental understanding and improve treatment of Parkinson’s disease. The journal is international and multidisciplinary and aims to promote progress in the epidemiology, etiology, genetics, molecular correlates, pathogenesis, pharmacology, psychology, diagnosis, and treatment of Parkinson’s disease. It publishes research reports, reviews, short communications, and letters-to-the-editor and offers very rapid publication and an affordable open access option. JPD has a 2019 Journal Impact Factor of 5.178 according to Journal Citation Reports (Clarivate, 2020) and is published by IOS Press. journalofparkinsonsdisease.com

About the Editors-in-Chief
Patrik Brundin, MD, PhD, is director of the Center for Neurodegenerative Science and Jay Van Andel Endowed Chair at Van Andel Research Institute in Grand Rapids, MI, USA. Bastiaan Bloem, MD, PhD, is a consultant neurologist and the director of the Center of Expertise for Parkinson & Movement Disorders at the Radboud University Medical Centre, Nijmegen, The Netherlands, and holds the position of professor of neurology with a special interest in movement disorders.

About IOS Press
IOS Press is headquartered in Amsterdam with satellite offices in the USA, Germany, India, and China and serves the information needs of scientific and medical communities worldwide. IOS Press now publishes more than 80 international peer-reviewed journals and about 75 book titles each year on subjects ranging from computer science, artificial intelligence, and engineering to medicine, neuroscience, and cancer research. iospress.com 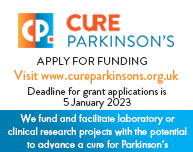