Findings Strengthen Biological Link Between a Rare Genetic Disease And A Common Neurodegenerative Disorder, Reports the Journal of Parkinson’s Disease

Parkinson’s Disease (PD) patients have a five-fold greater risk of carrying genetic mutations in the β-glucocerebrosidase gene (GBA), which are commonly associated with Gaucher disease (GD). Patients with both PD and GD tend to experience earlier onset of PD and more serious cognitive changes than PD patients without the mutations. A new study published in the Journal of Parkinson’s Disease suggests that GD or the presence of GBA mutations may actually shield patients from deficiency in visual color discrimination, which is a hallmark of PD.

“Consistent with previous studies, color discrimination was decreased in patients with PD. However, this study introduces new findings that relate to the impact of GD in the context of PD-related color discrimination. These findings may imply a ‘protective effect’ on color discrimination in those GD patients who also have PD, which probably is due to a sensory mechanism rather than a cognitive effect,” explained lead investigator Deborah Elstein, PhD, of the Gaucher Clinic at Shaare Zedek Medical Center Jerusalem (Israel), which is the largest clinic of its kind, devoted solely to Gaucher disease patients. This group, spearheaded by Prof. Ari Zimran, the Director of the Gaucher Clinic, was the first to publish anecdotal evidence of the association between GD and early-onset PD.

The investigators tested groups of patients on a color visual discrimination test known as the Farnsworth-Munsell 100 hue test (FMHT) and calculated their mean Total Error Scores (TES). In the FMHT, patients are asked to arrange colored caps so that there is a gradual transition in color between two anchor caps of different colors. Better performance is indicated by lower TES scores.

The groups consisted of 10 patients each, classified by PD only, GD only, both PD and GD, carriers of the GBA mutations, GBA carriers with PD or healthy controls. GBA carriers were thought to have one mutation whereas those with GD have two mutations.

Patients with both GD and PD made the second highest number of errors (mean 237.90), followed by those who were GBA carriers with PD (220.20). GBA carriers without PD made more errors (177.20) than those with GD only, which was approximately the same number of errors as healthy controls. Overall, patients with PD displayed worse visual color discrimination compared to those without PD. 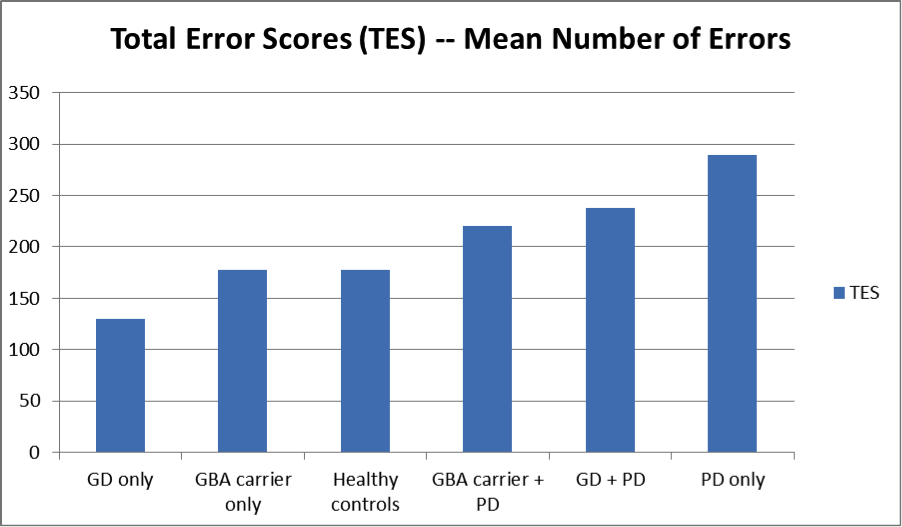 Caption: Mean number of errors on the FMHT by patient group.

These findings strengthen the evidence linking PD and GD. For instance, a small proportion of patients with GD, and an even higher proportion of their relatives who are carriers of GD, display symptoms of parkinsonism. Other studies have found that having one or two mutations of the GBA gene is a risk factor for PD, while PD patients have a greater than anticipated frequency of GBA mutations. GBA-associated PD is characterized by an early onset accompanied by severe cognitive impairment, and “generally these patients suffer more often and more severely from a variety of non-motor symptoms such as neuropsychiatric complaints and autonomic impairment,” commented Dr. Elstein.

Gaucher disease is the most common genetic disease affecting Ashkenazi Jewish people who originated primarily from Eastern Europe. According to the National Gaucher Foundation (www.guacherdisease.org), the disease has an incidence of about 1 in 20,000 live births, rendering it the most prevalent lysosomal storage disorder (a term referring to a group of disorders affecting enzymes that regulate metabolism which are located in cell lysosomes).

ABOUT THE JOURNAL OF PARKINSON’S DISEASE (JPD)

Launched in 2011 the Journal of Parkinson’s Disease is dedicated to providing an open forum for original research in basic science, translational research and clinical medicine that will expedite our fundamental understanding and improve treatment of Parkinson’s disease. The journal is international and multidisciplinary and aims to promote progress in the epidemiology, etiology, genetics, molecular correlates, pathogenesis, pharmacology, psychology, diagnosis and treatment of Parkinson’s disease. It publishes research reports, reviews, short communications, and letters-to-the-editor and offers very rapid publication and an affordable open access option. www.journalofparkinsonsdisease.com

Commencing its publishing activities in 1987, IOS Press (www.iospress.nl) serves the information needs of scientific and medical communities worldwide. IOS Press now (co-)publishes over 100 international journals and about 75 book titles each year on subjects ranging from computer sciences and mathematics to medicine and the natural sciences.

IOS Press continues its rapid growth, embracing new technologies for the timely dissemination of information. All journals are available electronically and an e-book platform was launched in 2005.