Now For The Bad News 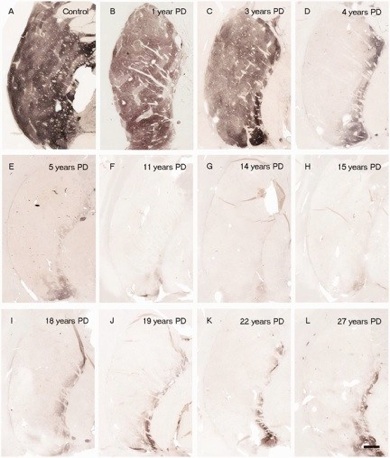 The Holy Grail of PD research is to find a disease-modifying therapy. If one could deliver neurotrophic factors to the putamen, for example, and rescue ailing dopamine neurons, it might change the trajectory of the disease. Unfortunately, most recent efforts have ended in failure. Setbacks include Amgen’s negative glial-derived neurotrophic factor (GDNF) infusion trials, Ceregene’s two failed Neurturin gene therapy trials (in 2008 and 2013) and Phytopharm’s 2013 unsuccessful trial of Cogane, an oral medicine designed to stimulate growth factor production. Some scientists like neurosurgeon Steven Gill argue that this neurotrophic strategy may eventually work, when researchers figure out how to deliver the right dose on the right schedule to the correct area of the brain. Others argue the failures have a simpler explanation — there’s nothing left to rescue; that trial patients’ nigrostriatal damage is too advanced to reverse.

This bleak conclusion is suggested in a landmark paper by Jeff Kordower et al., which investigated nigrostriatal pathology in 28 post mortem Parkinsonian brains and compared them with 9 controls. Since the PD patients survived for varying lengths after diagnosis (from 1-27 years), Kordower et al. set out to estimate dopamine loss in the substantia nigra pars compacta and putamen at different stages of the disease.

Using stains for two proteins normally active at dopaminergic terminals—tyrosine hydroxylase (the enzyme that converts tyrosine into L-dopa) and dopamine transporter (a protein that mediates dopamine reuptake) — Kordower et al. searched for dopaminergic damage. The team found plenty. At diagnosis, the substantia nigra pars compacta and dorsal putamen had lost respectively 50-90% and 50% of their functional markers. But as the enclosed figure graphically shows, the news gets much worse. By 4 years post diagnosis, the tyrosine hydroxylase stain in the dorsal putamen was completely gone. The team found an almost identical picture of total loss over 4-5 years in the dopamine transporter stains. One explanation for the lack of such dopamine markers in the striatum — the main input to the basal ganglia— is that within 5 years of getting a diagnosis from a neurologist a patient has virtually no functioning dopamine nerve endings left, reflecting “complete degeneration of dopamine terminals and a time point at which no benefit could be expected, even from a potentially effective agent.” The team is at pains to point out that they can’t rule out an alternative explanation — that the data “may reflect a phenotypic downregulation of the markers.” In other words,  there may be some potentially revivable terminals left that did not stain for TH and DT. But Jeff Kordower a pioneer of neurotrophic factor research, says he is “pessimistic…because it’s not just that the fibers are degraded, they also do not transport dopamine normally.”

This may be shocking news to patients, journalists and many researchers but it turns out that neuropathologists have long suspected that something like this was true. Co-author Thomas Beach of the Arizona Parkinson’s Disease Consortium (whose group supplied much of the brain tissue for this study) concedes that, “Neurotrophic factors will only work if you start super early. If you wait until the formal diagnosis has been made, there's often a lot of destruction, and you can't really hope to reverse that.” British neuropathologist Chris Hawkes says by the time a patient gets a firm diagnosis of PD,  “the pathology is far more advanced than you’d think…. And to put it crudely, the brain is well and truly pickled.”

If this study is confirmed, there are profound consequences for future trials of disease modifying interventions. Indeed, Kordower et al. conclude that given the substantial loss of dopamine markers in the nigrostriatal terminals, “Our findings suggest that there may be significant challenges for ‘neuroprotective’ therapies that include patients with > 4 years disease duration.”

Co-Editor-in-Chief of the Journal of Parkinson's Disease Patrik Brundin, however, is not quite as pessimistic about future prospects for neurotrophic therapy.  He cites an intriguing 2005 Nature Medicine paper, in which British researchers analyzed brain sections of a patient who had suffered from PD for almost 9 years. What makes this patient of special interest is the fact that some 4 years prior to death (he died from a heart attack), he was enrolled in an open label GDNF infusion pilot trial run by Bristol neurosurgeon Steven Gill, and received unilateral infusions into his right putamen. Here’s what’s remarkable. At post mortem, the pathologist found very clear staining of tyrosine hydroxylase fibers in the right putamen, whereas the untreated left putamen was blank. Says Brundin, “This suggests that GDNF might have "rejuvenated" nerve fibers that were affected by the PD process.”

Gill and colleagues have recently launched a follow-up study (funded by Cure Parkinson’s Trust and Parkinson’s UK) comparing patients who received GDNF—via a specially designed device that conducts growth factor to the putamen under “convection enhanced delivery ” conditions—with sham surgery controls. There is also a NIH trial in the works.

Until such studies are completed and published, it’s too soon to give up on neurotrophic factors.  But Kordower’s take away message for researchers working on any disease modifying therapy is clear—the sooner you act, the better!

I was diagnosed 2011. i was diagnosed with Parkinson’s disease. My symptoms progressed quickly. Soon i was having difficulty breathing, swallowing and even walking short distances. With the help of Health Herbs Clinic natural herbs I have been able to reverse my symptoms using diet, herbs, which i feel has made the most difference. The Parkinson’s natural formula immensely helped my condition, it reversed my Parkinson’s. my slurred speech, then the tremors, and mobility gradually disappeared, visit healthherbsclinic . com , people are suffering from this horrible disease due to lack of information.